McKey Carpenter is the chainmail artisan behind Moravian Armory.  The name comes from his interest in the Northern Scotland Kingdom of Moray that fell in 1130 A.D.  An admirer of myths and legends, he uses elements that harken to Pictish, Celtic, and Scandinavian designs.  Moravian Armory produces striking jewelry and dramatic costume pieces that can take months to complete.

Carpenter is a New York City actor and producer, currently creating his own pilot titled “Mormaer’s Saga: Fall of Moray.”  In between scouting locations and acting in other productions, Carpenter works away on his chainmail pieces (sometimes in between takes).  In a Q&A with Ordinary Artisans, he weaves together his creative pursuits and early influences to tell us more about Moravian Armory.

Where are you from and where do you live now?

Well I was born in a small town in Virginia called Tappahannock , kinda near Richmond.  Then when my parents split I bounced between there, Marblehead, and the Berkshires in Massachusetts.  After High school I made a mad dash for New York City where I live today.

Well, I like to create. Whether it be with my hands as a crafter or with my voice and body as an actor.  But with my jewelry and armor I would describe it as ancient techniques for modern wear.

As a kid, my uncle Bob would always take us kids to the Medieval fair and one year he taught me to make chainmail.  Then I completely lost interest for at least ten years.  Then I met a leather artist and we started making armor in our spare time, and now that my brother is crafting leather as well its awesome to make something together.

Why do these materials speak to you?

Honestly it is because that is what I want to produce on film.  But also because I can. 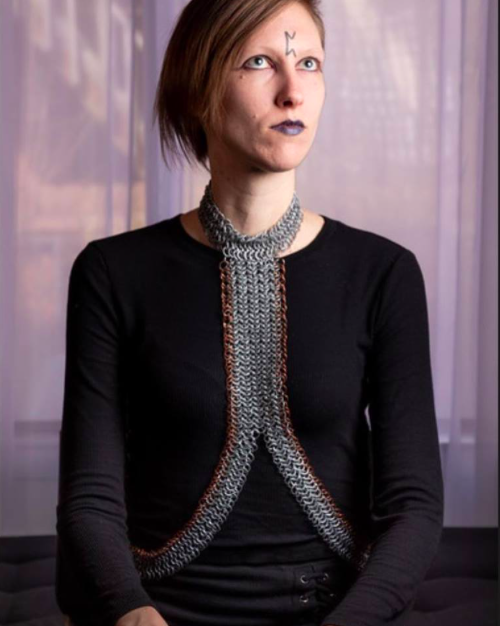 In your product descriptions you often include summaries of myth and legends.  Do these stories influence your designs from the beginning?

Yes and no. I usually get an idea for a design in my head, and as I am building it I do research.  Then about halfway through construction I find its name. Funny story about the Boudica Necklace. Both the leather artist [Kendra McDevitt] and myself where thinking on a name ever since I gave her the chainmail patch for it.  She told me she was going to include Italian leather and amber.  So, I sat thinking “Who uses chainmail? Well the Celts and Romans, ITALIA, ITALIAN, who fought Rome? Boudica! We both email “What about Boudica” at the same time. lol

All my mom’s fault. lol.  She brought me up reading “The Lion, The Witch, and The Wardrobe”, “LOTR” [Lord of the Rings], plus I used to live next door to Salem Massachusetts.

Did acting come before chainmail?

Yes and no. lol.  I learned chainmail around 11-12, lost interest, and then caught the acting bug around 14-15, but just recently at 32 started back up with chainmail.

Do these art forms inform each other?  Storytelling seems to play a role in the chainmail as well.

No but they complement each other.  When I am on set or back stage I am always waiting, hurry up and wait. So, I filled that free time.  For example, the Asgardian Guard Mantle I made on the sets of “Gotham” (Fox) and an “Uncut Gems” (A24) commercial.

What was your favorite project as an actor and why?
Actors dread this question. lol. In Manhattan we have a small theater company called The Drilling Co. and they are known for Shakespeare in the Parking Lot.  We were doing “Love’s Labou’rs Lost” and I was playing Longaville as a crazed energetic drummer of a punk band. We even smoked fake pot during another character’s monologue and became part of his scene. I have never been so exhausted, focused, in shape, and thrilled to be doing exactly what I was doing.  But I have a feeling this pilot may blow that out of the water. 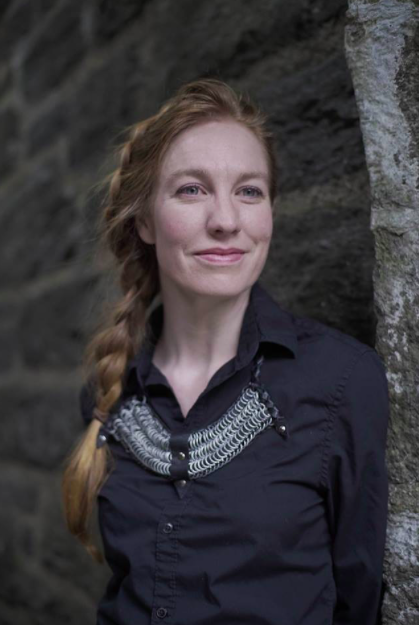 Can you tell me about the film that you are working on?

It is actually the pilot to a tv series [“Mormaer’s Saga: The Fall of Moray”] which I created, wrote, will be producing and acting in. But I refuse to direct too! lol. Well as you can imagine it is set in the dark ages and my shop is making the armor.  But it follows two warriors in Northern Scotland fighting to keep English feudalism out of their country. There is also a dark element as we discover the demons of Scotland and those that hide within men. Thankfully this is BEFORE “Robert The Bruce” (Netflix) because I just saw the movie trailer and almost had a heart attack. lol

Chainmail seems like a time-consuming process.  What is it about this craft that keeps you going?

I just get obsessed with what it could be and have the patience to see it through. And you are correct it is time consuming.  The 6 in 1 shirt has taken me almost two years.

What projects do you have coming up soon?

I just got over my year-long injury and eagerly hunting for new projects.